Sanitation is the elevation of health through hygienic practice. This can be accomplished through avoiding any interaction with hazards such as physical, microbiological, biological or mediators of diseases. Prevention can be obtained through treatment, proper disposal of wastewater sewage.62% of Africans do not have access to an improved sanitation facility.

One of the most dominant and severe sanitation diseases that remains a global threat to the public health as well as an indication of inequality and lack of social development is cholera. “Cholera is an infectious disease that causes severe watery diarrhoea and that leads to dehydration and even death if left untreated” .It is caused by the consumption of food and drinking water that is contaminated by a bacterium called vibrio cholera. The disease is common in places mostly with poor sanitation, where there is crowding as well as famine. This includes places such as Africa, south Asia and Latin America. About 1.3 – 4.0 million cases and 21000 to 143000 deaths worldwide are due to cholera.

Cholera is caused by a comma shaped bacterium called Vibrio cholera. It is spread when a person eats food or dinks water that has been in contact with infected faeces. Common sources include uncooked fruits and vegetables, undercooked food that has been in contact with the bacterium, drinking contaminated water. These are ways that the bacterium can be introduced into the body leading to cholera. If, however care is taken to thoroughly cook food and to purify water this can kill the bacteria lessening the risk of infection. The common housefly also plays a huge role in carrying around the bacterium from where it has been passed out in faeces from an infected individual to the food. House fly feed on a wide range of organic matter that is from food to even faeces. Now when the fly is in contact with the contaminated matter the bacteria adhere to the fly and some are even ingested. When the fly hovers around clean food it passes the bacteria onto the food by vomiting on it or by some of the contaminated matter clinging onto the fly’s hair being released leading to food contamination.

How does it spread?

The ingestion of contaminated food or water allows the vibrio cholera to go into the acidic stomach. The high acidity of the stomach allows it to be able to digest the food we eat and a mucus layer protects the stomach walls. Due to the stomach being acidic, consumption of concentrated amount of vibrio cholera results in an infection depending on the concentration of one’s stomach. The vibrio cholera that survives the acid in the stomach goes into the small intestine and to reduce the acidity of the substances from the stomach bicarbonate is released (HCO3). These enterotoxins attach on the chlorine channels opening them and this allows the chlorine ions to pass through the open channels back into the lumen, this prevents sodium ions from attaching on the gut cells and thus also moved or retained in the lumen. Under normal circumstances chlorine, sodium, water, and other electrolytes pass through the intestine to the extracellular fluid. Due to high concentration of sodium, chlorine and potassium ions in the lumen water moves from the extracellular fluid into the lumen, which has a high concentration of the ions and this due to osmosis. This movement of water into the lumen with ions results into a watery faeces diarrhoea and dehydration. Due to high contractions of the walls of the intestine one experiences nausea and vomiting. Loss of the essential ions and water results to dehydration and if untreated leads to death.

Each individual’s body functions differently which is one of the reasons why symptoms of cholera may become prevalent either just a few hours after being infected or five days after attracting the infection. Usually, these symptoms appear to be mild. However, many individuals exposed to the Vibrio cholera show little to no symptoms at all, spreading the bacterium to others. Studies indicate that 1 in 10 infected individuals display serious symptoms a few days after attracting the bacterium.

Symptoms of cholera include:

Symptoms of cholera dehydration include:

Cholera is a controllable disease provided several actions are taken in the short, medium and long term. It’s important to prevent Cholera with appropriate measures such as keeping healthy by drinking water that is clean and safe. Vaccines could be used and avoiding areas where Cholera commonly occurs or has had a recent outbreak.

Some tips could include:

Keeping clean at all times is the key. Always wash your hands after using the toilet and before handling food. Using soap helps kills all the bacteria and germs that are on your hands. An alternative such as an alcohol based sanitizer can be used if you don’t have soap and water.

Drink water that has been disinfected or bottled water. Boil the water for three minutes to disinfect it or you can use a chemical disinfectant. Wipe the outside of hot beverages, canned or bottled drinks before use.

Try avoid meals from street vendors. If you buy a meal from a street vendor, make sure it’s hot and cooked in your presence.

Immunization is not warranted in endemic areas. Children, pregnant women and HIV positive people should be the main focus. Immunization should be used in areas where the disease is endemic and where most of the outbreaks happen. Enteric Vaccines is a strategy that has been put into place for people who are vulnerable and are living in high risk areas.

Hydration is the backbone of treatment for cholera. Oral or Intravenous solution treatments replace lost fluid depending on the severity of the disease. Antibiotics kill bacteria but aren’t part of emergency treatment for mild cases. They reduce the time of bacteria as well as the excretion and thus helping prevent the disease.

Hydration is the mainstay of treatment for cholera.

Cholera requires immediate treatment because the disease can cause death within hours:

Rehydration solution is a simple technique that replenishes lost fluids and electrolytes within the body. Oral rehydration salts (ORS) is a powdered solution that can be reconstructed in boiled or bottled water. Rehydration is important as most people with cholera die if they don’t rehydrate. The fatality rate drops less than 1% with treatment.

Apart from hydration, intravenous fluids are another way that cholera patients can be helped.

Antibiotics aren’t a major part of cholera treatment. By taking some of the drugs it adverse effect is that it can reduce both the quantity and time it takes for the cholera-related diarrhoea for those for are severely ill.

Due to research done, Zinc reduces and shorten the duration of diarrhoea in children with cholera.

Seek medical help immediately if you have symptoms of watery diarrhoea and vomiting after travelling to a cholera epidemic country. It is easy to treat cholera but due to the fact that dehydration happens rapidly then immediate treatment is needed.

Prevalence of cholera in Africa

African countries account for over 90% of all the worlds cholera cases reported to the World Health Organization. The prevalence of cholera in African countries is largely aided by socio-economic factors and environmental factors which pose challenges in the ever-increasing rate of cholera outbreaks in developing countries. Most African countries are developing countries which have low GDP rates which is the best statistical tool that can be used to determine the life expectancy in those countries which is influenced by a range of factors like accessibility to basic health care and availability of basic infrastructural development. For an example, DRC has one of lowest GDP’s in Africa and has a life expectancy of 52 years. DRC is the number one cholera stricken country in Africa and this is due to absence of adequate preventive and treatment measures which are a product of a sustainable economic growth which most African countries are struggling to accomplish.

Cholera is a transboundary disease which poses health security risks for many African countries because in cases of outbreaks measures to treat and prevent similar incident outbreaks are expensive which results in increased infection and death tolls as a result of cholera in most developing countries. This pandemic is cyclical and seasonal though it is preventable and treatable developing countries are still prone to it being an inherent part of the biophysical environment this means that the cholera bacterium reoccurs on regular basis by fluctuating weather patterns involving heavy rain or dry season.

Apart from the environmental factors that aid in the prevalence of cholera in African countries there are major key systematic primary causes which are inadequacy and inaccessibility to basic health care services, clean running water and quality sanitation schemes. The inaccessibility to basic health care is comprised of many factors like internal conflicts and limitations of technical expertise which are the product of well or sustained economic development, these challenges possess dysfunctional medical services in developing countries which ultimately plays a role in the increasing rates of infection and spread of cholera though it is a preventable and treatable disease 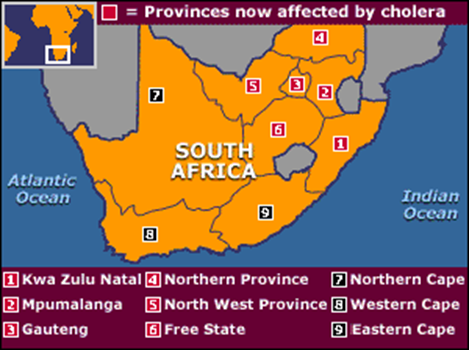